In the heart of Riyadh, craftsmen form the essential element to the Gulf region’s national headdress. It might seem trivial, but the black agal has an essential function – keeping Gulf men’s headdress perfectly in place.

Across the Arabian Peninsula, the white thobe and black abaya are worn as a sign of style and tradition, as are headwear for both men and women. Though these pieces of national dress have not been made by hand for a long time, one thing still is: the small but essential agal, a black cord worn by men to keep their headdress in place.

‘All men wear agal here, at least on certain occasions. We sell maybe 15 or 20 every day,’ says Mohammad Al Falha, known as Abu Yassin, who has a small agal workshop inside the Deera market in old Riyadh. His workshop is tiny, only a small room with one side open to the street outside, facing a small restaurant serving fresh bread and breakfast beans where plastic chairs and tables line the walls. 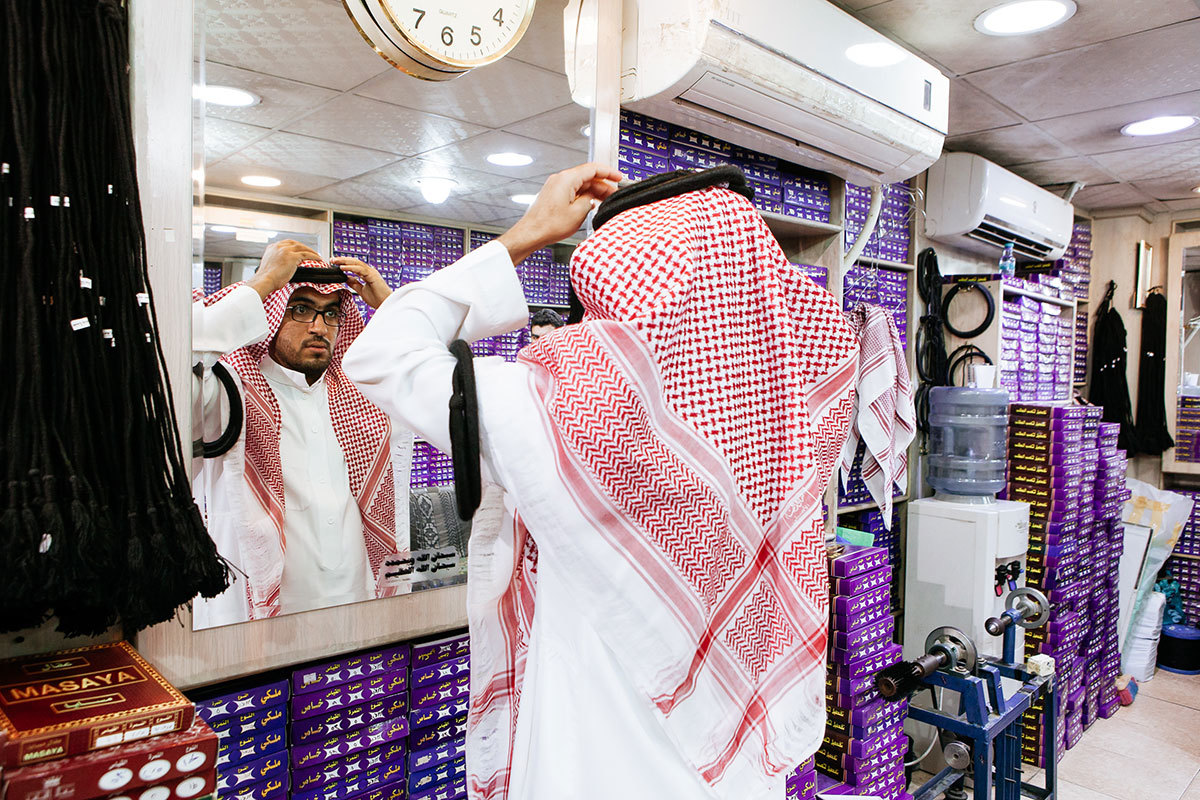 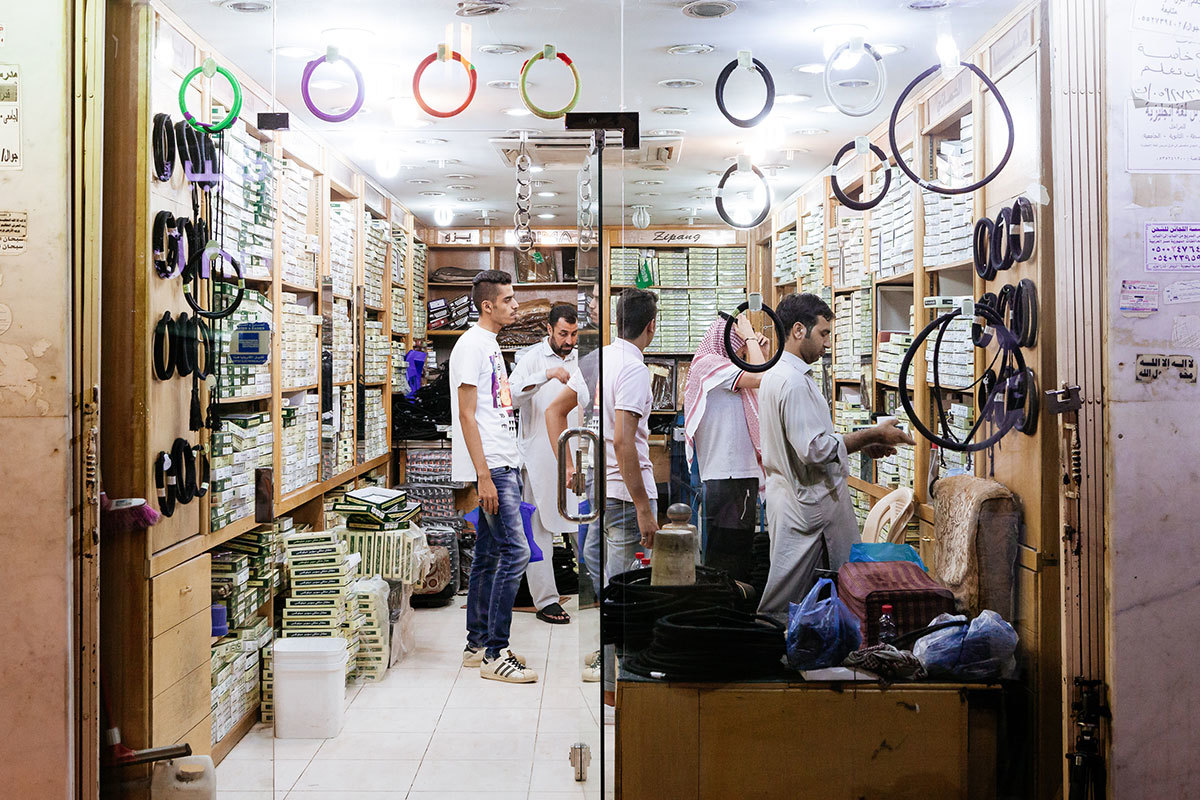 Top: A customer tries on a new agal, part of the everyday attire worn across the Arabian Peninsula
Bottom: Friends trying on agals inside a shop in the Deera market in old Riyadh

Abu Yassin steps outside his shop, holding a large skein of yarn in his hand. It is black, thick and made from cotton. After fastening one end to a nail near the door, he stretches the yarn out a few metres away to another nail, then starts winding it. He makes small talk to a customer seated outside with a plate of food, as he works. After a while, when the yarn has been looped several times, he stops and takes out an electric drill. It has a tiny hook where Abu Yassin fastens the yarn, then starts the machine. After a few seconds, the long stretch of yarn has become perfectly twisted and tight.

The workshop has been open for 28 years, since Abu Yassin came to Riyadh with his family from Hama in Syria. That’s where he first started learning how to make agals, at a workshop dating back over 150 years.

‘Hama is known for making agals. The craft was always transmitted from parent to son, through the generations. I learned from my father who learned from his father,’ says Abu Yassin.

The agal is originally a Bedouin tradition, shared by people across Iraq, Jordan, Saudi Arabia and other Gulf countries. Resting heavily on the head, it weighs down scarves worn by men, typically white or checked white-and-red, known as shemagh or ghutra.

‘You don’t wear it as a headband. It should rest on top of the head like this,’ says a man with dark sunglasses and a perfectly fitted white thobe who walks into Abu Yassin’s shop. He tries on an agal and looks in the mirror. ‘I work not far away from here, at a ministry office. We always wear these clothes in the workplace, it’s part of our tradition,’ he says. 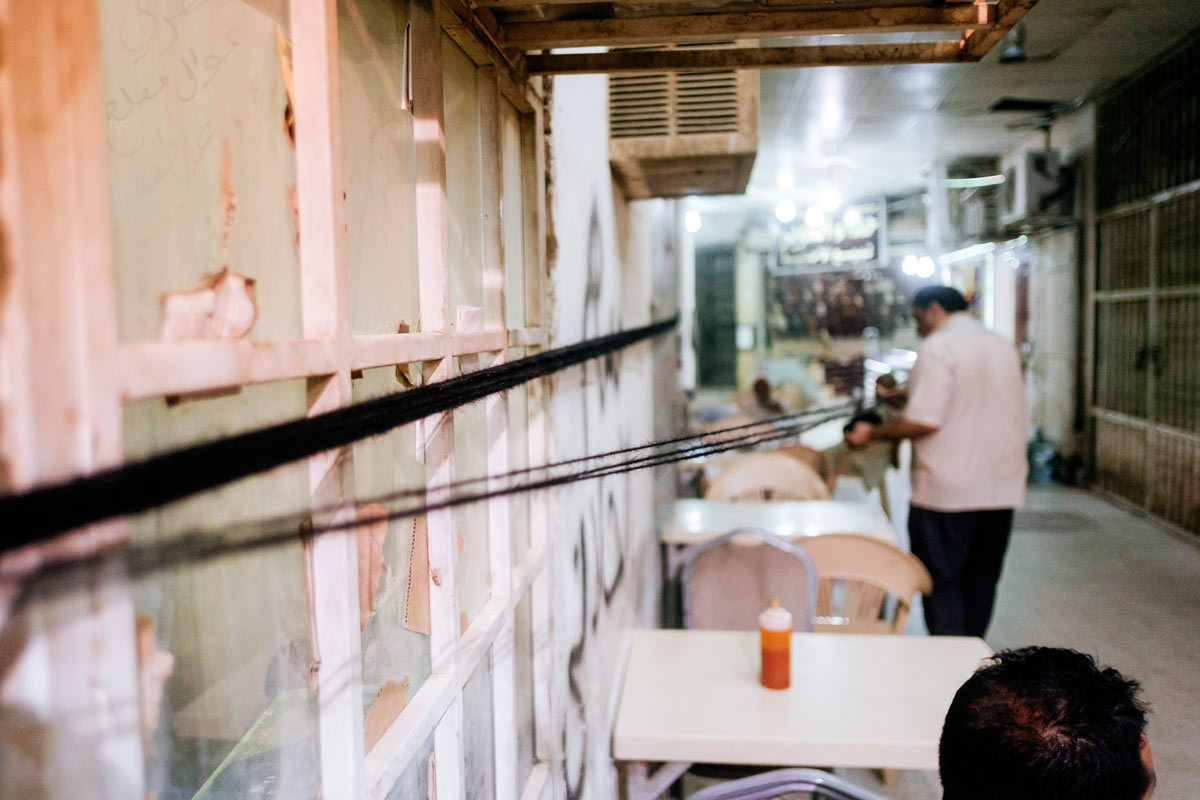 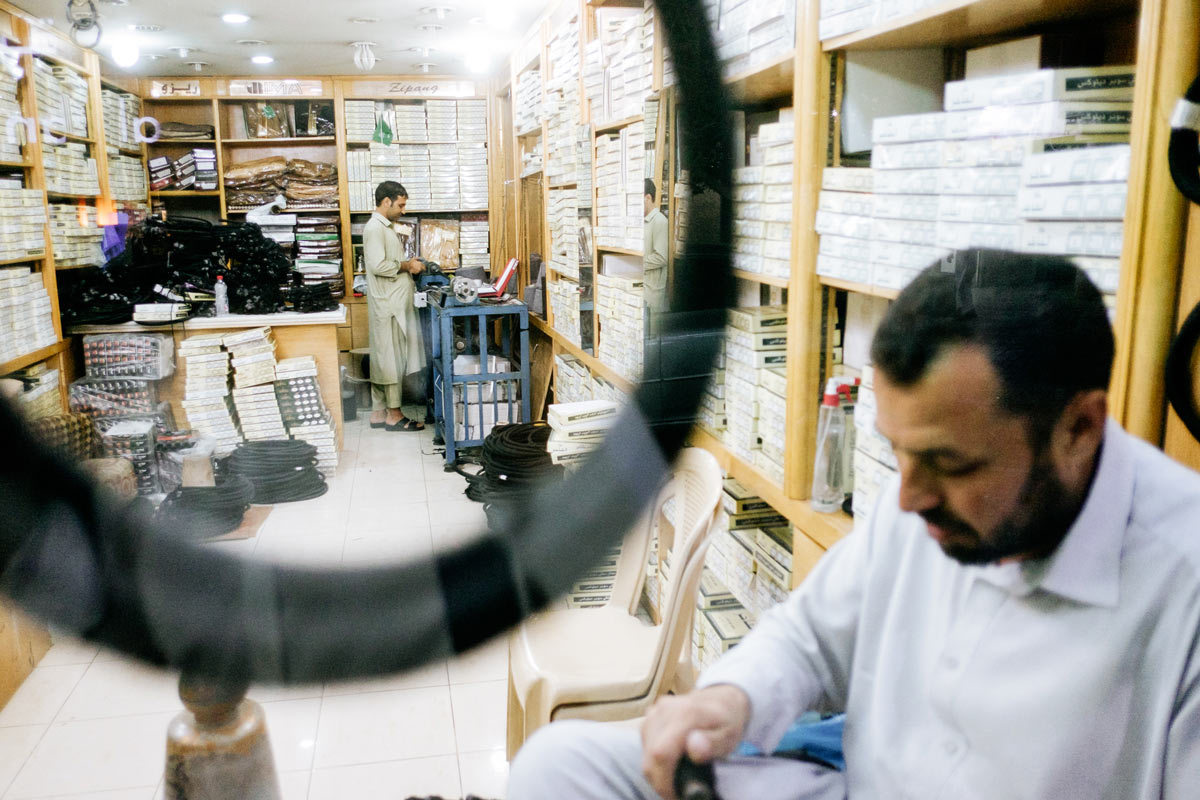 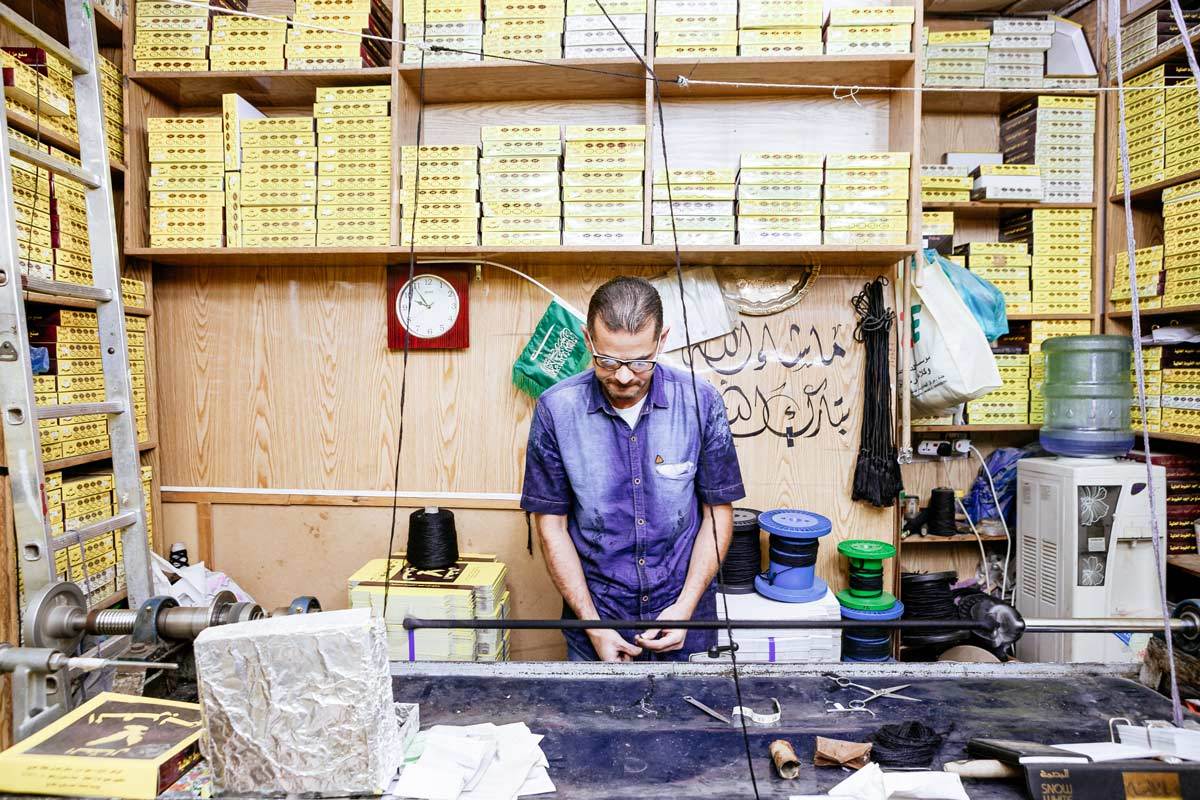 Abdullatif Al Wadayhi, from Hama in Syria, spins the outer thread around the twisted yarn forming the agal

Just next to Abu Yassin’s workshop are several others, also making agals. They all have open windows, and small stools and cushions on the floor where people sit with black cords in the making. There are boxes with agals from floor to ceiling, saying things like ‘Dream Man’, ‘The Jewel’ or ‘Agal Royal’.

Inside one shop, at the back of the room, stands Abdullatif Al Wadayhi, also from Hama in Syria. He loops yarn using the same simple machine that Abu Yassin uses. Two hooks, fastened on either side, have twisted the yarn. Al Wadayhi takes the end of another thread, in an even deeper shade of black, and starts spinning it around the long, twisted yarn. He works the yarn from one end to the other, until he has a strong and perfectly smooth cord.

‘Before these machines, we did this manually. We had a kind of wooden apparatus with a pedal to twist the yarn, says Al Wadayhi.

He hands over the cord to another man, Baten Ahmad, who sits against a pile of agal boxes. He uses a large needle to sew the ends together, turning the cord into a large circle. The stitches, sewn closely together, resemble an elaborate form of crochet. ‘This is for decoration, to hide the part where both ends have been attached to each other,’ says Ahmed.

Most agals have this feature: small and simple stitches ornamenting the cord. Besides that, the variations are countless. Agals may be made from cotton or polyester, or different kinds of wool.

‘We often use sheep wool, sometimes mohair from goats. The yarn we use is imported from Germany, Italy or the UK, and the cotton is from Syria,’ says Abu Yassin. 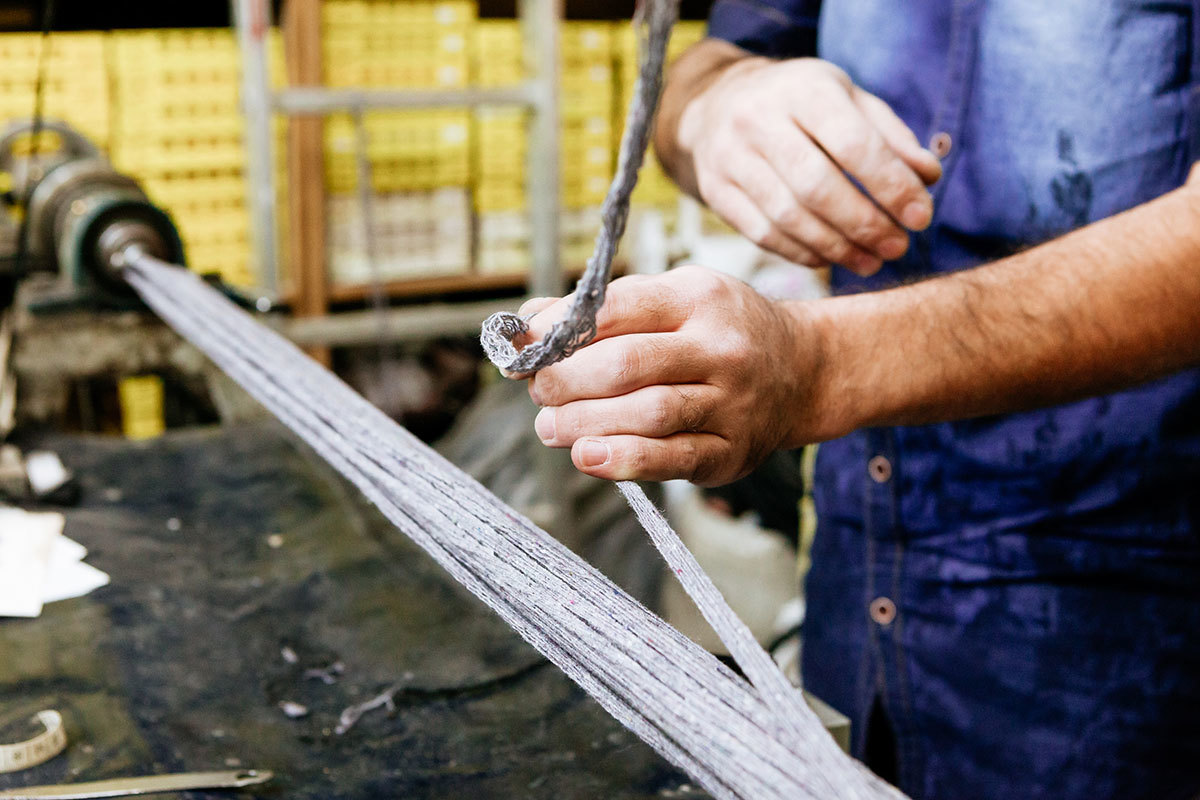 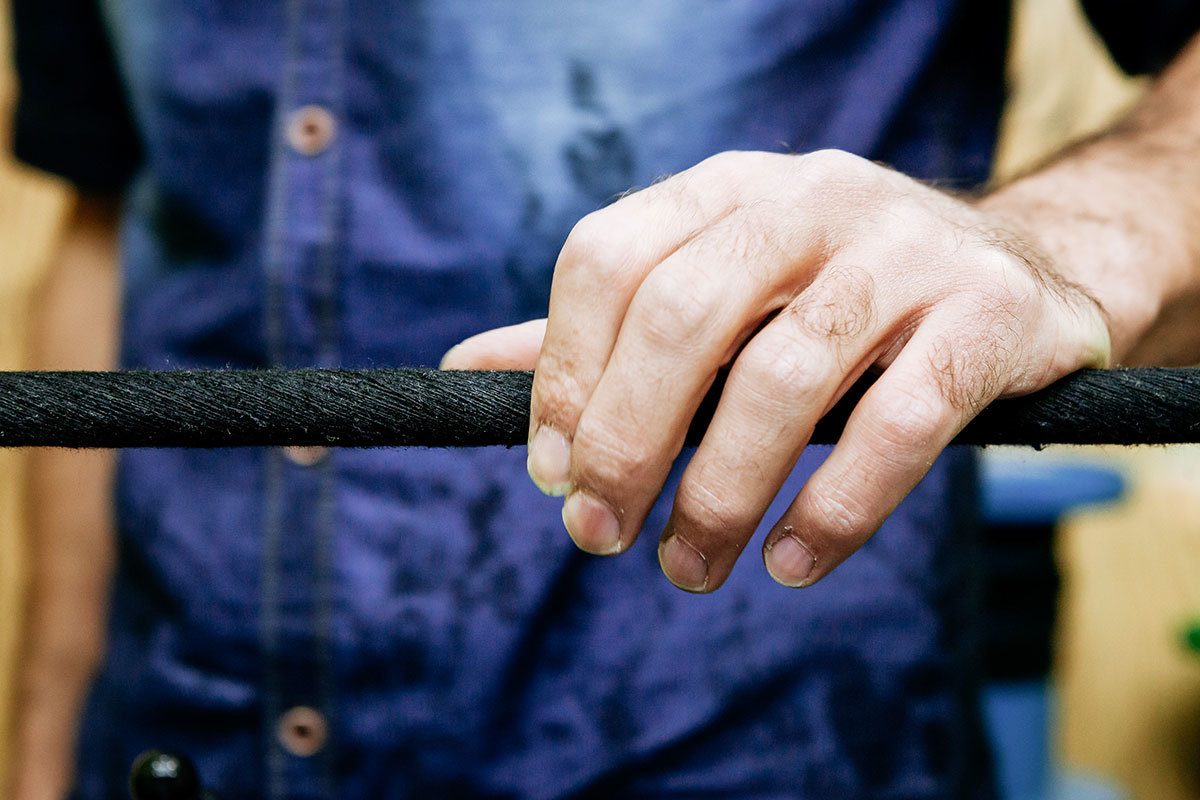 Top: The first step when making an agal is twisting a yarn made from wool or cotton
Bottom: From start to finish, the agal is made by hand 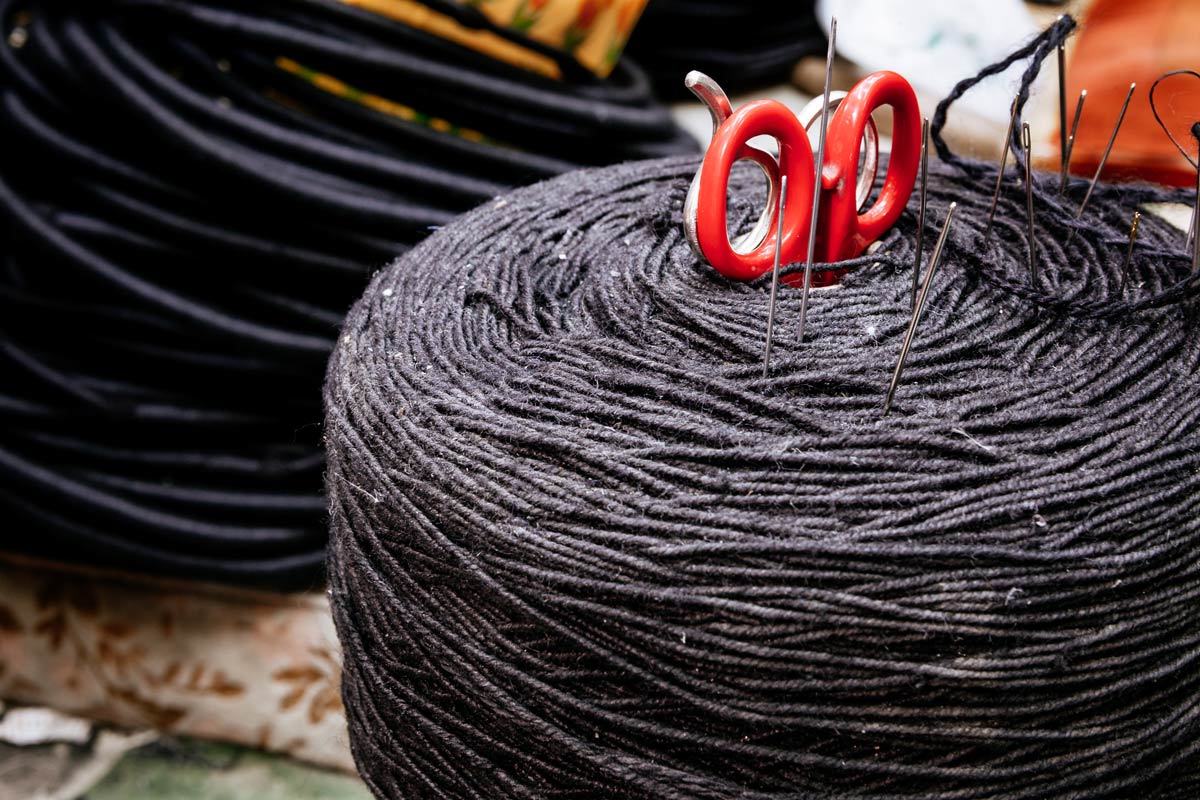 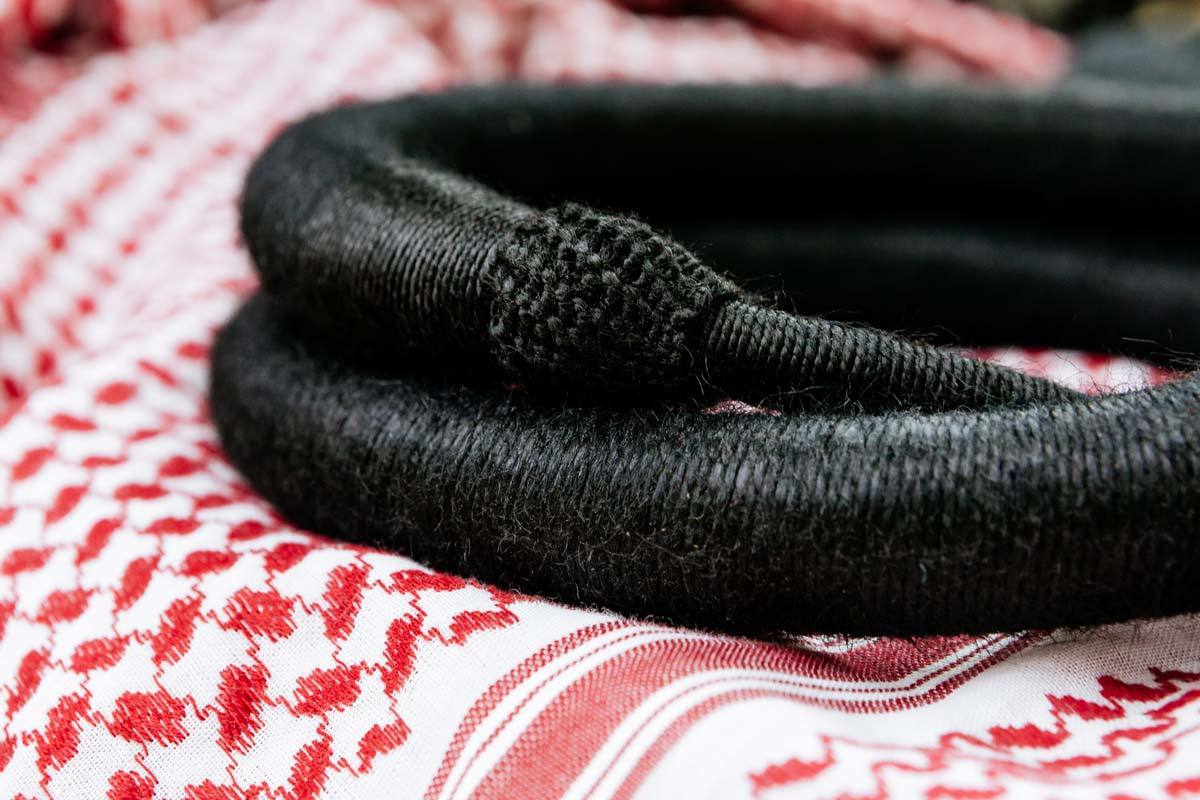 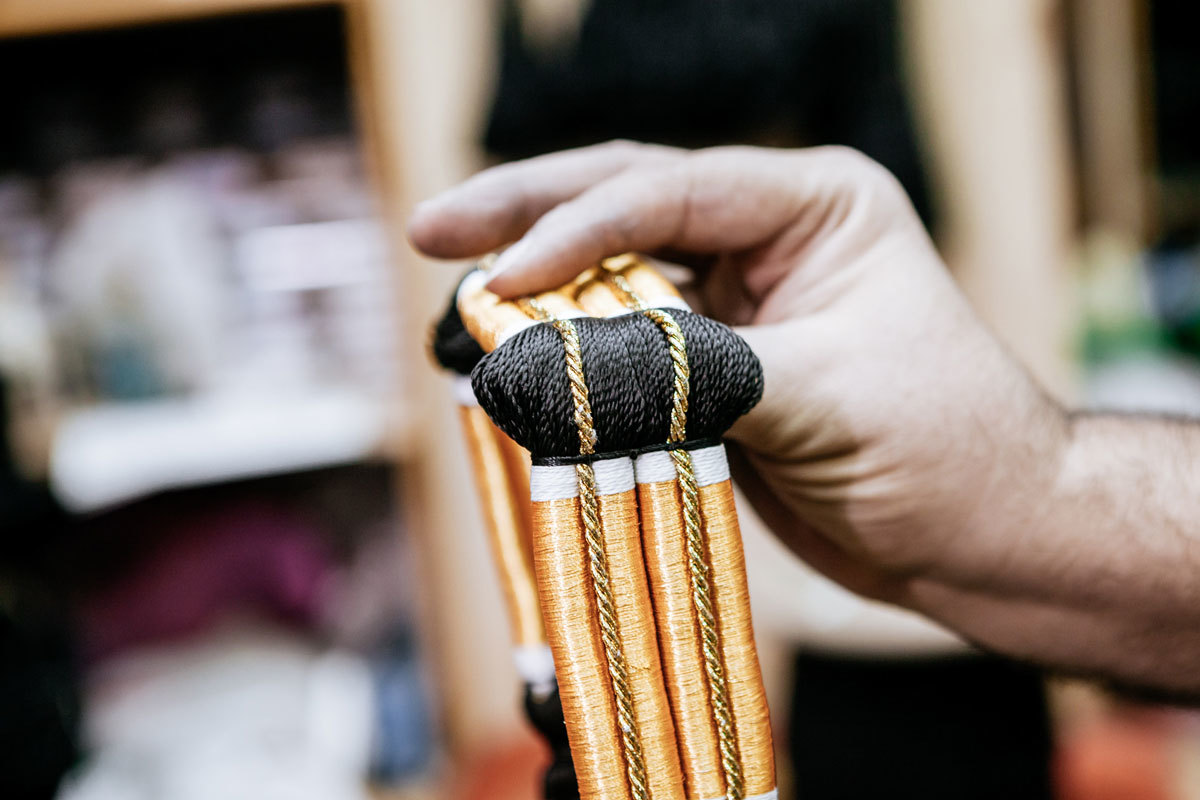 He takes out an agal with thick, finely twisted, golden decorations. It’s the only one made with gold, all the others in his shop are entirely black.

‘This is the royal style. It’s associated with two Saudi kings, King Abdullah and King Fahd. The Bahraini family also used to wear them. But that was in the old days – these days everyone prefers black,’ he says.

While the Gulf outfit may look uniform at a glance, there are many decorative differences and regional variations. People in Bahrain prefer small, tight agals, whereas Iraqis often wear thick and woollen ones. In Qatar and Bahrain, it’s common to have tassels hanging down in the back, which is never seen in Saudi Arabia. The white thobe, which has survived the transition from nomadic to urban life, also varies. Saudis often wear collars and small studs; Bahrainis prefer a loose and unbuttoned style. In Oman and the United Arab Emirates, thobes typically have a small white tassel hanging from the collar. One thing unites, though. The robe must always be spotless and unwrinkled.

The door to Al Wadayhi and Ahmed’s shop remains open, with a constant flow of customers dropping in to buy or ask something about their agals. ‘Is this German thread?’ or ‘Do you have size six, I want the same as usual.’

The simplest agals, plain and rather thin, cost around 40 to 50 Saudi riyal. The most expensive, of superior quality and with intricate details sell for around 150 Saudi riyal.

‘It usually takes me around 20 minutes to make an agal. That’s if I work fast. If I take my time it takes 30 minutes,’ says Al Wadayhi. Ahmed, just finished with stitching the agal in his lap, takes out a wooden bat and starts beating the knot. 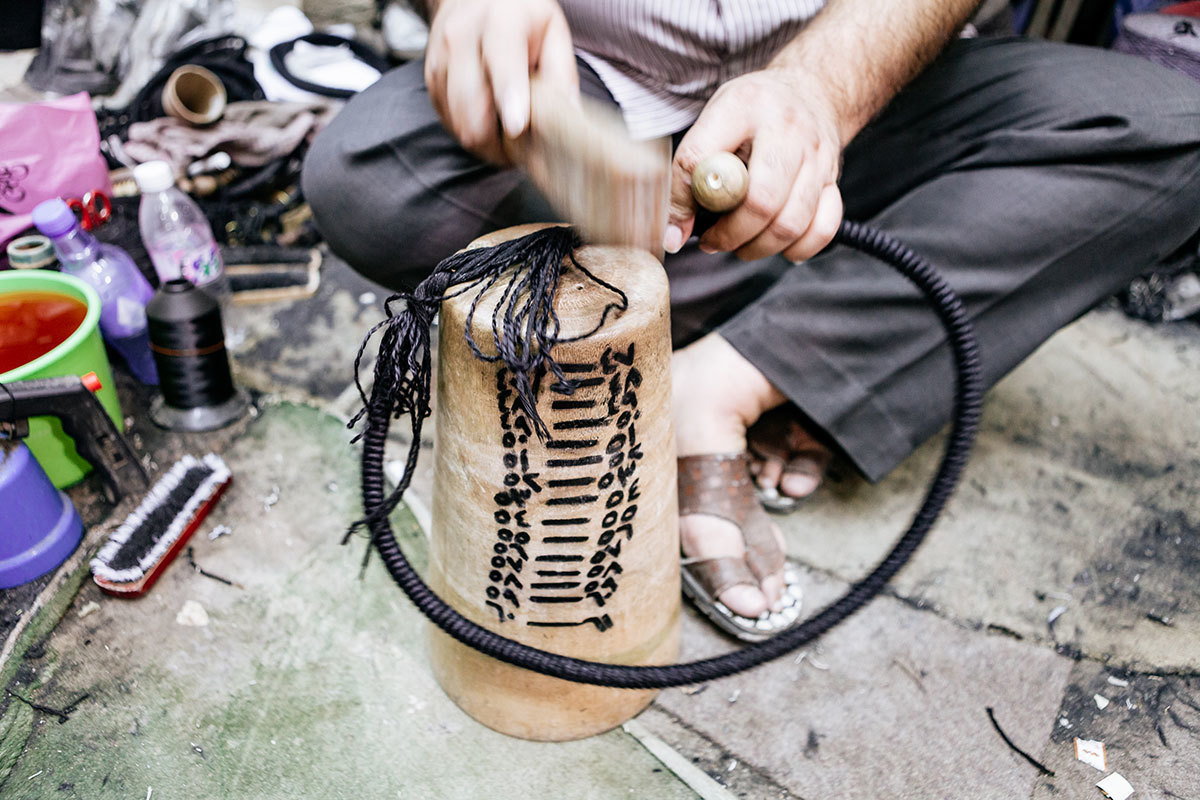 Abu Yassin beats the agal to form a tight shape 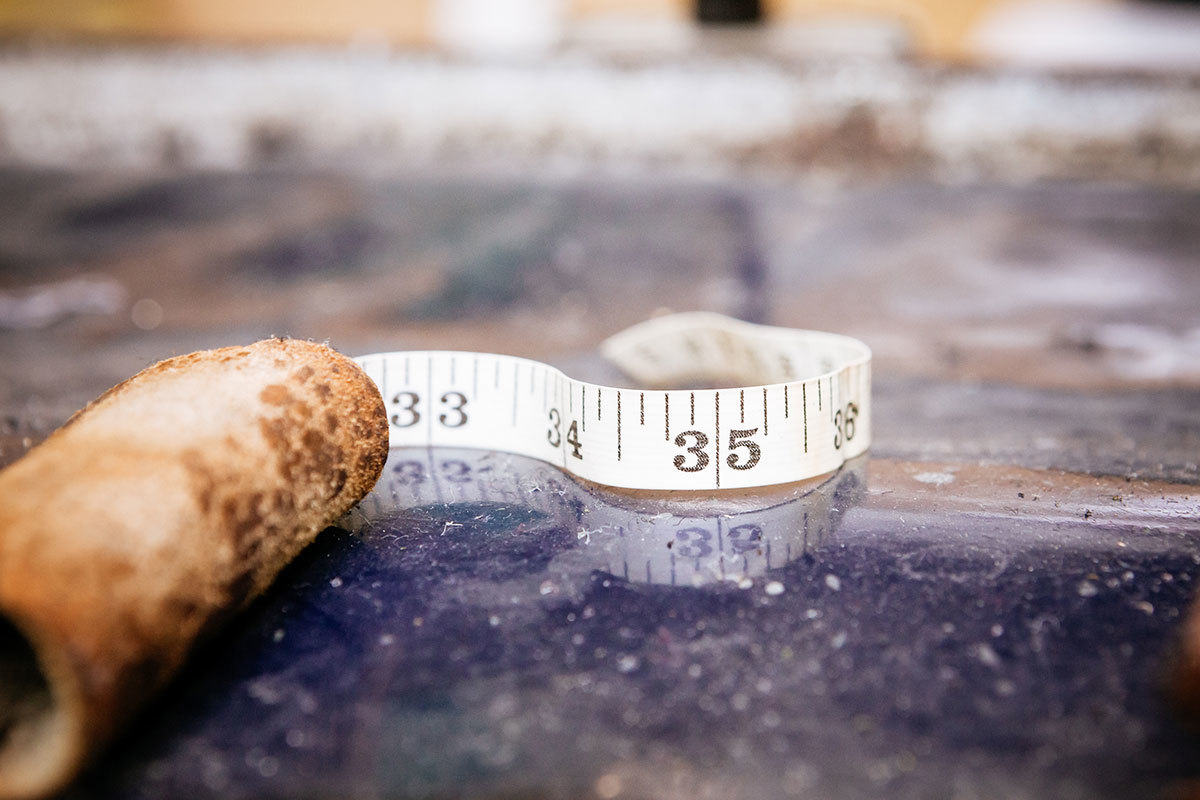 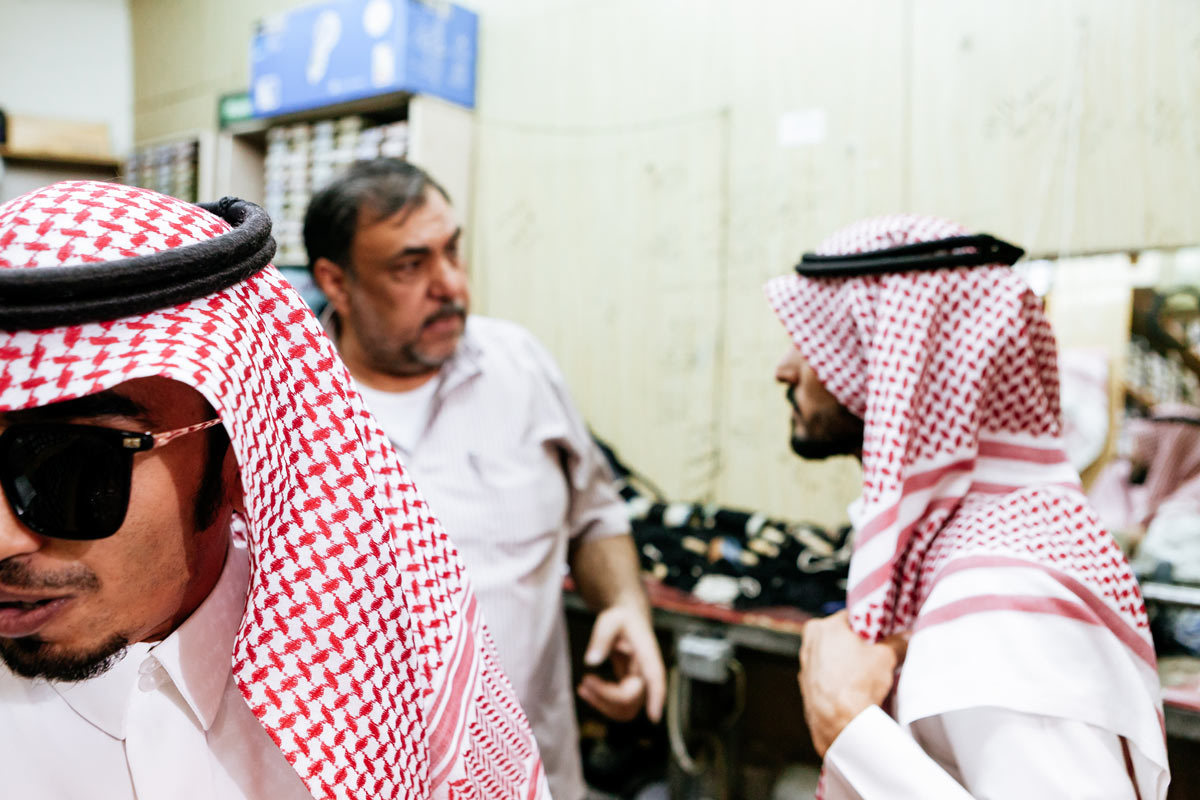 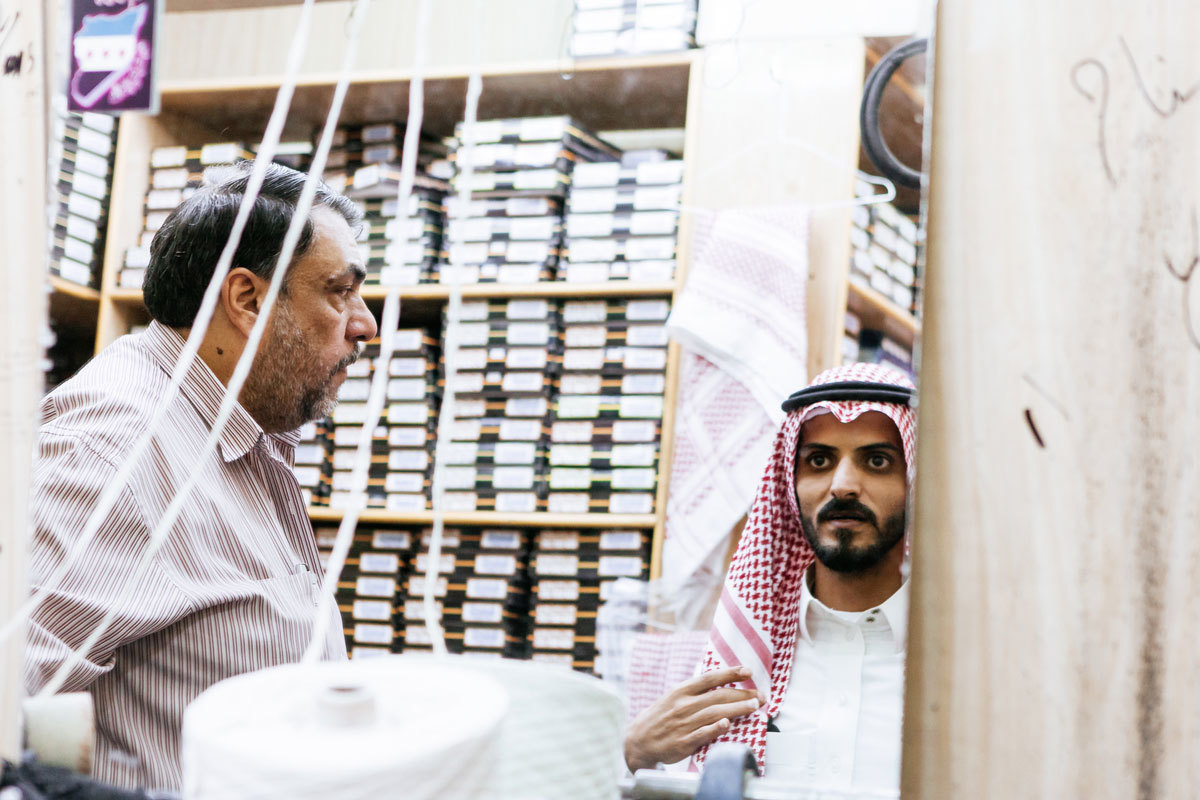 Top: Agals are made in different sizes, to fit individual preferences
Middle and Bottom: Customers at Abu Yassin’s workshop

‘This is to make the stitches tighter. The knot often moves a bit, gets bigger and uneven. I want it tight and neat,’ he says.

He reaches for a wooden cone, marked with numbers to indicate different sizes, then folds the round cord in double and puts it around the cone. With the bat, he beats the agal into a uniform shape.

As a final step, Ahmed walks away to the window, where he keeps a small gas burner. He lights the fire and moves the agal quickly through the flame a few times to give it a smooth and even finish. Outside, the call for prayer can be heard from several different directions. Shop owners start pulling down their metal shutters, and walk in the direction of any of the nearby mosques. Riyadh – its shops, markets and craftspeople – takes a small break, before returning to work again.